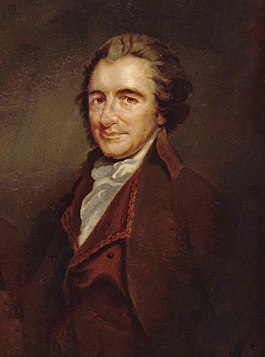 People love to observe birthdays, and it is understandable. The birthday is a celebration of life. Too often people fail to acknowledge the death of a man; for the death of a man contains his accomplished deeds. This is partly why people remember the deaths of mighty men like Lincoln, King, Lennon, and Kennedy.

It is past time that we remember the death of another great man who died on June 8th, 1809. What makes him great? In the words of former President John Adams, “Without the pen of the author of ‘Common Sense’, the sword of Washington would have been raised in vain.” ‘Common Sense’, written by Thomas Paine was the best seller in his day. The first three months, a hundred thousand had been printed and sold. Through the course of the Revolutionary War, it is estimated that half a million were produced (some of which were bootleg copies). This is out of an estimated free population of two million.

So why is it that a man who is considered in the running as THE father of the American Revolution plays such a small role in the school history books? Paine also wrote ‘The Age of Reason’. It advocated the use of reason and freethinking, and also promoted the case for Deism. When he argued for Deism, he was making a case against organized religion, specifically the doctrines of Christianity.

After the Revolution, he continued to promote freedom in ways that became unsettling to the fledgling nation of the United States. He spoke up for things that went ignored by those ‘in power’. The nation ignored him and his love for freedom in the worst possible of ways. When he died, one obituary read, “He lived long, did some good, and much harm.” No church would bury him, so he was buried underneath a walnut tree on his farm.

Real heroes not only belong to the their own times, but like artists or prophets, are all too often ahead of their times. This would be the reason that only six, only SIX, people were present at Paine’s funeral. In the words of orator, Roger Ingersoll :

Thomas Paine had passed the legendary limit of life. One by one most of his old friends and acquaintances had deserted him. Maligned on every side, execrated, shunned and abhorred – his virtues denounced as vices – his services forgotten – his character blackened, he preserved the poise and balance of his soul. He was a victim of the people, but his convictions remained unshaken. He was still a soldier in the army of freedom, and still tried to enlighten and civilize those who were impatiently waiting for his death. Even those who loved their enemies hated him, their friend – the friend of the whole world – with all their hearts.

Freedom, once obtained, can not be freely maintained. As the hands of tyranny abroad have handed the reins to tyrants here, I will quote Paine, with one alteration :

These are the times that try men’s souls: The summer soldier and the sunshine patriot will, in this crisis, shrink from the service of freedom [orig. their country]; but he that stands it now, deserves the love and thanks of man and woman. Tyranny, like hell, is not easily conquered; yet we have this consolation with us, that the harder the conflict, the more glorious the triumph. What we obtain too cheap, we esteem too lightly: it is dearness only that gives every thing its value.

8 thoughts on “How to Dishonor a Hero”